They Have to Pass Us: A Discussion With Students About Our Educational System 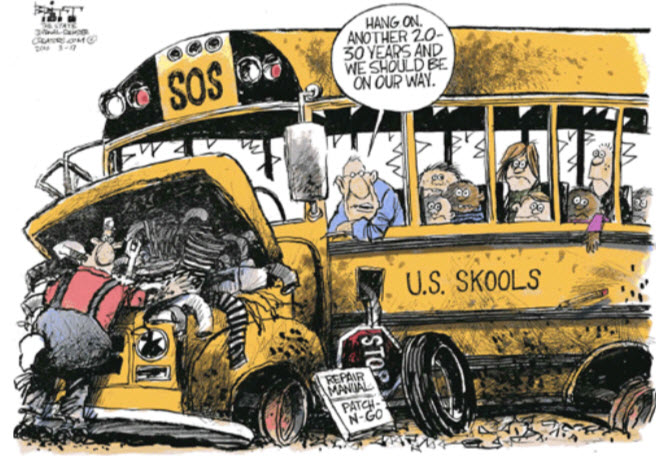 A group of male students were discussing education after school. I wanted to chime in, but I decided not to as I didn’t want to infringe on their honesty. However, I was excited when they called me over as they had two questions. As soon as I approached, two of the four boys asked, “Do principals and teachers have to pass their students? Even if we don’t do anything and fail, it makes y’all look bad doesn’t it and that’s why y’all give us 100 chances?

After pausing for a second to catch my breath, I responded that’s not true. Our goal is to ensure that you have multiple opportunities to be successful and educators feel if you fail, somehow someway we feel as if we have failed you. That’s how most of us think. One of the boys then stated..”I told y’all he was gonna give us the principal answer.”

At that moment another student yelled out, Dr. J keep it real! This is how it works because it happened to my sister and brother.

Even if you fall behind early in kindergarten, first, or second grade, all mom have to do is go talk to the principal and you’ll be passed to the next grade. If the principal want to keep you back another year, all you have to do is go down to the “Big Offices” downtown and talk to the principal’s boss, they’ll have a meeting, sign some papers and you’ll go to the next. This happens even in the third, fourth, and fifth grade too. They say you have to pass the state test in third and fifth grade, but that’s not true. They’ll still pass you.

Middle School is the same. If you don’t pass your classes, they won’t keep you back. But the work is a little harder in middle school. However, you still have a chance because no matter you do, the lowest grade a teacher can give you is a 50. Again, we get to the end of the year and even if they want to keep you back, they can’t. All you have to do, is have those meetings again, they’ll put a plan together, and move you to high school. But if you’re bad, they don’t even have the meetings they just move you on.

High school is a little different. The classes are super hard and you really struggle because you can’t read that good. Also, they don’t have all of those meetings. Also, if you don’t pass the classes, you won’t pass. My brother was a senior and only had six credits. If you’re like that you’ll switch schools, do your work on the computer, and you can pass a whole class in a few weeks. My brother passed like 5 classes in two months.

My sister was a little smarter than us. She didn’t have to go to the other school. However, she needed credit recovery too and almost didn’t graduate. But my momma went to the “Big Offices” and talked about my sister will be the first one to graduate, our entire family is coming to town, and say she was never notified my sister was failing. They put put a package together for her to do over the weekend so her grade can be a C and she can graduate. At this point, one of the other students stated “Dr. J you’ve been a principal in elementary, middle, and high schools. Is that how it is? I hesitantly stated, somewhat. I’ve seen or heard of some of those situations. The boys stood in disbelief as they said bye to me, as they walked off to catch their bus.

After this encounter, I sat in my car reflecting on the discussion as I’ve heard, witnessed, and discussed each of the scenarios with my colleagues. In a era of increased accountability on school districts, principals, and teachers, these scenarios have become the norm. However, for some reason, we’ve underestimated our students and didn’t think they’ll figure this system out. According to the boys, this is a contributory factor as to why students give minimal effort. Is this how it works? Are they correct?