The First Day of School: What About the Other Days? The Back to School Bash 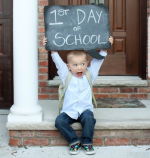 The Day Before the First Day

The commercials about the bargains on uniforms, school supplies, and school clothes are on every channel. The entire country is preparing for the first day. As my friends and I hang out we’re just enjoying the day with an occasional question – who’s your teacher or who’s in your class? We’re just trying to enjoy this last day. However, I must admit that I’m excited because tomorrow is the first day of school as everyone is excited, concerned, and invested in my education.

The First Day of School

It was hard to sleep last night as I was ready to go to school. I had a fresh outfit laid out, some new shoes, and I got a fresh cut from the back to school bash. I’m up early and ready to roll. Everybody is at the bus stop, everyone looks good, some have uniforms, some parents are dropping their kids off, and I’m really freaking out because dads are at the bus stops and some are following mothers to the school because they are car riders today. This is strange but cool.

The bus ride to school is cool as we’re talking about football and what we did during the summer. Oh my goodness, we’re pulling up to the school and everybody is here. I see a line of men waiting to greet us, there’s music, the news is here, the principal and teachers are smiling, and all of those important people from the birthday bash are here as well. This is awesome.

If today is an indicator of how this year will be, I’m ready. Again, mom and dad was here, walked me to class, was nice to each other, and everyone was happy to see me today regardless of my flaws and how bad I was last year. It appears as if I’ve been forgiven. I can’t wait to finish my homework, so I can go outside and play.

The Second Day and the Rest of the Year

The bus stop is still lit, but there aren’t too many dads out here today. However, the uniforms are new and everyone still have on their new shoes. Wow! Some kids actually have on a different pair of shoes today.

Again, we’re talking about school and football on the bus and I’m still excited about school. Yesterday was awesome! As we pull up, I recognize that there’s no one there, there’s no music, there’s definitely no dad’s around, and I was looking for those men who greeted us as we entered the building, that really made me feel special.

Well it appears to be the same ole same ole school year. I just wish everyday could be like the first day. My mom and dad actually went an hour without arguing, the community was excited, everyone appeared to be concerned about my education and the school, and the positive men in suits and uniforms really had me thinking they would around this year.

Unfortunately, this year will be the same. The principal, teachers, and staff at the school, will be on their own to not only to teach, but handle every problem their students have. But, they’ll do just fine as they always do. They’ll actually sacrifice their own families to ensure that we have what we need. However, our school, my principal, my teachers, the staff, and the world would be a better place if everyone supported, appreciated, and was equally excited about school the entire year as they are on the first day. Maybe everybody is celebrating because they don’t have to see or deal with us as much because we’re in school. Again, I’m left asking myself the same question every year. Everyone’s excited about the first day of school, but what about the other days?