Their Unseen Potential: Recognizing the Talent in African-American Males

Having been a principal at all levels, I have literally seen everything as it relates to students not reaching their full potential. Unfortunately, no group more fits this criterion than African-American males. African-American males are often categorized as a population “at-risk” in education (Davis, 2003). In many of American society’s domains, these males hold a peculiar, but uncertain, status. I have heard the terms, not driven, dysfunctional, pitiful and dangerous are some of the terms often used to characterize African-American males. Such terms, along with negative stereotypes, create an environment in which the child has failed before he even enters the classroom. Recently, I returned to work at an elementary school after working at a high school, and I now view office referrals and the behaviors of African-American males through a different lens. Upon my return, I immediately was blown away by the encounters I had with three black male students.

My first encounter occurred with a first-grade student who was escorted to my office for disrespecting his teacher. Outside my office, he noticed me unpacking a box, assembling an item for one of my teachers, as my custodians were out. As the student approached me, he had several questions:

Then he said something that made me pause: “Dr. J, let me do it.”

At this point, I was stunned, but I responded, “Sure, go ahead.”

“Absolutely, go ahead,” I replied. I watched him as he looked at the bars, screws, and the Allen wrench (analyzing the parts).

“That’s an Allen wrench; it’s used to tighten the screws.”

At this point, he began the process of figuring out how to complete the project (critical thinking). He grabbed a bar, then a screw; next, he grabbed the Allen wrench, and off he went. He was relentless as he screwed in one bar at a time, looking at me, smiling, to make sure I was watching him.

Occasionally, he would ask, “Doc, you checking me out?”

I watched him make several mistakes but never intervened (the little guy showed great determination). After about 30 minutes, he jumped up and said: “Dr. J., there it is, but it’s not tight, though. You’ll have to tighten it up.”

Then I thought about the teachers he will encounter during his next 11 years in school.

As educators, we have to recognize and tap into our students’ talents. If the teacher expects this student or any other student to sit still for 30 minutes as she lectures, she’s sadly mistaken. He’s a kinesthetic learner, a critical thinker; he’s analytical and very determined.

“Dr. J, are you going to tell everybody I put it together?”

“YES, YOU ARE!!!” One thing I’ve learned in my educational journey is that our kids will ALWAYS exceed your expectations. Your expectations just must be high (regardless of the student’s level). However, each student must be given an opportunity. When asked what he would like to be when he grew up, the student answered that he wanted to build buildings, to be an engineer. 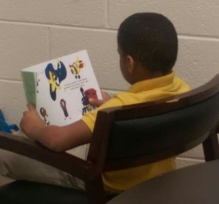 The next encounter actually occurred in my office. There was a particular student who would often find his way into my office because he had either walked out of the classroom or disturbed the class during instruction. A calming method I often utilize with my boys is to have them color fancy cars (Porsches, Lamborghinis, and Bentleys). I keep these colored pictures in a folder in my office. On one particular day, before leaving work, I had an opportunity to take a look at this student’s work. His cars were perfectly colored. The textures of the crayons between the lines were perfect, and the combination of colors he used was so beautiful. This really grabbed my attention, and I immediately went to the art teacher and asked had she noticed something special about this student and his artistic ability. The teacher answered with an emphatic “Yes!”

Two days later, the student was in my office again, but this time he asked to eat lunch with me; of course, I agreed. After finishing his lunch, he wanted to know if he could read his book.

After watching him flip through the pages and read, I stopped my work and asked the student to come over to my desk and read to me. He literally blew me away ― he was just in kindergarten, but he was already reading, even though he occasionally stumbled over the occasional word or two. It was at this point that I recognized this student’s unique ability, and I asked him what he would like to be when he grew up.

He replied, “I want to write and illustrate my own books.”

The next encounter occurred about a week after my meeting with the author / artist. This kindergarten student has had a variety of social and emotional issues and wasn’t new to my office or even in having an administrator being called to the classroom because of a tantrum. One day, this student was in my office completing his assignment when a group of fifth-grade students were eating lunch with me.

While eating lunch with my fifth graders, we began what we called the “mental math challenge,” an activity we play in which we simply ask each other math problems. The first one who gets the correct answer receives a point, and at the end of lunch, the student gets a prize. During this session, the kindergarten student raised his hand and asked, “Can I play?”

The fifth-grade students looked at each other, laughed, and said, “Lil guy, this game is for the big boys! You’re just in kindergarten; you’re not ready for this yet.”

To my surprise, the student responded, “Hey, give me a try; I think I can hang.”

At this point, the rest of the boys said, “Let him play.” I stopped typing.

One fifth-grade student asked, “What is 350 + 350?” A few fifth graders gave each other high fives as they just knew this question was too difficult for the young student. The kindergarten student looked at the ceiling, and you could literally see his brain operating like a well-oiled machine as he thought about the problem.

The student then said, “I got it!” A silence came over the room, and all I could hear was the air conditioner.

With the students looking on, the student yelled out “700!” The fifth graders were stunned.

The students paused for a second and yelled out “500”, and the fifth graders, as well as I, all went crazy ― we were intrigued by this kindergartener’s mental math. When asked what he wanted to be when he grew up, this student responded that he wanted to teach math.

A few weeks after these encounters, I started paying close attention to these young boys. I noticed a few things: 1) there were specific times that students were behaving inappropriately; 2) the teachers did not recognize the students’ strengths; and 3) there were specific antecedents that led up to each incident. An antecedent is defined as a “thing or event that existed before or logically precedes another.” Having knowledge of these students’ strengths made me really ask the question, why are they having such a difficult time in the classroom? Therefore, I began to ask the teachers about the students’ performance before the inappropriate behavior? What was the antecedent? What led to the occurrence? It was at this point that the teachers recognized a few things that they actually already knew but had never really paid attention to.

The engineer’s infractions would usually occur in the morning after mathematics. During most of his infractions, we noticed a few things: 1) he would become frustrated when it was time to put the manipulatives away; 2) he would become upset when involved in an activity that required some critical thinking and problem-solving; and/or 3) he was frustrated when it was time to move on to the next activity, or he hadn’t completed the activity. The plan of action for the engineer was to extend his activity time, allowing additional time during lunch; the student subsequently became a lead student in mathematics. This student never returned again to my office for a behavior infraction.

The author / artist’s infractions would usually occur during reading, English language arts period and when it was time to work in groups, areas in which this particular student struggled. Even at the early age of 6, he was a perfectionist and loved for things to be just the way he liked them. He had never been to pre-K and was deprived of learning the necessary social skills, such as how to share, since he was with his grandmother and aunt while his mother was at work. Additionally, this student already could read while the other students were working on kindergarten-level work. The plan of action for this student was to allow him to go to a first-grade class during his English and language arts block. Needless to say, the student never had another behavior issue that warranted an office referral.

After reviewing the antecedents of the engineer and the author / artist, I could literally predict the antecedent of the mathematician. When I asked which subject the class was beginning when he began to have the most behavioral issues, the teacher answered emphatically, “It’s right before math!”

It was at this point that I told the teacher what happened in my office when the fifth graders were playing mental math. The teacher was in awe; she had been consumed by the student’s behavior and didn’t pay attention to what had precipitated it. The plan of action was to place this student in a first-grade class during his mathematics period.

As a result of my experiences with these three students, I concluded that the experts are correct. Not only must we as educators find our African-American male students’ best learning styles (Dr. Jawanza Kunjufu), to avoid inadvertently causing the very behavior we are trying to correct, but we must recognize their talents as well. Teaching “to” these talents enables the student to both perform at an optimal level in the classroom and avoid the boredom that often leads to acting out and inappropriate behaviors. Finding the hidden strengths and talents in our African-American male children leads to academic success for the child and fulfillment for both teacher and student. We should always remember to “include student interests in lessons.” In the example provided with these three male students, finding out where the hidden talents of the unmotivated child’s is critical. Once this is done, the teacher is equipped with the tools to include some of these activities in their lessons, to develop a sense of success.”

3 thoughts on “Their Unseen Potential: Recognizing the Talent in African-American Males”